The term Ùncham’ initially meant grains that have fallen off from the plant. Unchavrithi primarily meant living out of the grains that are left after a harvest festival.

With the passage of time, Unchavrithi indicated the way in which a Gruhastha Bhagavatha would lead his daily life (Dharmasastra prescribes other types of livelihood for Brahmacharees and Sanyaasees).

`Uncham’ in this context, meant the Akshatha (grains) that the Bhagavathar receives as a Grace of God, while he walks past the houses while singing Bhagavath Gunas and Naamas.

In Mahabharatha, there is a story of an erudite scholar Padmanabhan, who, despite mastering all scriptures, had this doubt – Is it possible to attain the epitome of the purpose of life – Moksha, while in Gruhasthashrama itself?

His fellow scholars opined that unless one takes up Sanyasa, attaining Moksham is impossible. Not satisfied with this verdict, Padmanabha’s inquisitiveness to know the Absolute Truth took him to the land of the learned snake Thakshaka in Naaga Loka. (Needless to say, only a person with immense thapas can be qualified to travel to the Thakshaka loka).

Thakshaka was not there at home. He was serving as the rein of the Sun God’s chariot. All the super powerful serpents serve as hackamores for one week at a stretch, and then retired for rest.

Resolute to rest only after dispelling his doubts, Padmanabha decides to wait at the mansion of Thakshaka, refusing the offerings that Thakshaka’s wife makes to him, as Aathithya maryadha. At the end of seven days, an exhausted Thakshaka returns home. Upon seeing a guest equally famished, he enquires the reason for Padmanabha’s visit.

Padmanabha put forth his question thus – While dispelling your duty as the rein of the Supreme Sun God himself, have you happened to see any miracles?

Thakshaka got reminiscent, and said - Our Sun God himself is a big miracle for us, for he works constantly while gifting the universe the luxury of a day / night distinction. But yesterday, we happened to witness a magnanimous phenomenon, which even our Sun God revered with utmost respect. As we were travelling through the vast expanse of space, dispelling darkness wherever we go, we spotted a Jyotis (divine light) hundred times brighter than that of our Sun God. As it approached us, it soaked our very Sun God in its effulgence. He rose from his seat, and offered his prostrations to this divine soul, and resumed the chariot only after the divine light crossed the Surya Mandalam.

Padmanabha’s questions were cleared instantly. He returned to his abode with profound clarity that the journey towards Moksha lies in observing Unchavrithi dharma.


The Greatness of Giving Unchavrithi Bhiksha 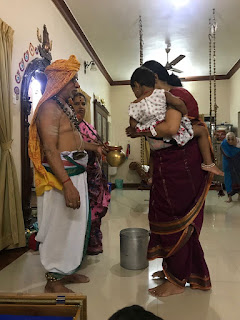 Scriptures proclaim that giving one handful of rice as Unchavrithi is equal to Sahasra Brahmana Bhojanam.

Once there lived a man, who suffered from an excruciating stomach ache. Thirupathi Balaji came in his dreams and told him that the pain was a result of a heinous sin he had committed in his previous birth – He had neglected to take care of his mother. The Lord also gives him the remedy - This pain can be ended by giving Sahasra Bhojana. Though a poor person, he agreed to perform Sahasra Bhojana in a haste to get relieved from the unbearable pain.

But upon being cured, he is baffled on how to perform a Sahasra Bhojanam, as he was already living in extreme poverty. Thirupati Balaji appears in dreams again, and tells him that a devoted disciple of Purandara Dasa, Sri Vijaya Vittala Dasa would pass that way, doing Unchavrithi. If you offer him a handful of rice, that is equivalent to sahasra bhojanam.

Another story has it that, once, a miserly old lady was pounding rice in front of her house, when a pious Unchavrithi bhagavatha came. “How dare you beg for food without doing any job” she scorned at the Bhagavathar, and raised her club (Ulakka) at him. A few rice grains that were sticking on to the club accidentally fell into the poor Brahman’s akshaya paatram.

After her death, when Yama Raaja asks Chitraguptan for the list of good deeds she has done in her life, Chitragupta has one in his accounts – That she has given Bhiksha to an Unchavrithi Brahman. Thus is the greatness of giving bhiskha!

The Unchavrithi Bhagavatha wears Panchakacham, has a shikha, and ties a parivattam / shirovastram, using a Naama vastram. This parivattam contains all four Vedas. The akshaya paatram is tied to a red rope (Unchavrithi sootram) and is hung from the left shoulder. He would have been initiated into Naama japa sootram and Unchavrithi Dharma Kainkarya sootram.


The bhagavatha either sings Bhagavath keerthanaas, or does Raama Naama japam. An Unchavrithi Bhagavathar would chant Raama Naama at least 6750 times. (1,08,000 Rama Naama divided by 16)

As the Unchavrithi Bhagavathar is the swaroopam of Sadguru, He does not do prathivandana.

Rice and dal (lentil) are usually given as Bhiksha. Though giving money is not a traditional practice, it is given in the present times, as it could be of convenience to the Bhagavathar.

Dharma shastra also prescribes the time period an Unchavruthi Brahmana can stay at a house while seeking Bhiksha. He can remain only for a godohana kaalam (time it takes for milk to flow from a cow’s udder to the ground. 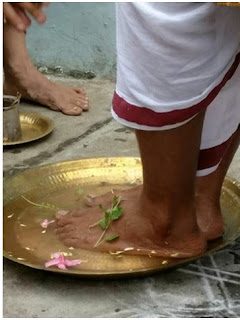 The gruhastha (householder) does paadha pooja, and the lady of the house gives the Bhiksha. In the instance of an Unchavrithi Bhagavatha crossing a house, he shall not come back to ask for Bhiksha. The lady will need to walk toward him to give Bhiksha. 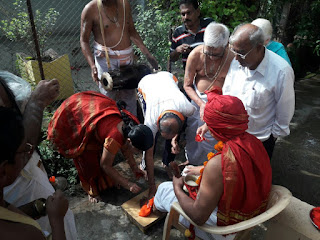 Marudhanalloor Sri Sadguru Swamigal has given supreme importance to Unchavrithi in Sampradaya Bhajana Paddhathi. Sadguru’s spectacular stature in Unchavrithi roopam is sung in many of his Guru keerthans. During Sadguru’s time, Sharabhoji Maharaja saw Sri Ramachandra Prabhu Himself while Sadguru was in Unchavrithi attire.

Even today, the rice and dal for the celebrations at Bodhendra Swamigal Madom at Govindapuram, and Sridhara Ayyavaal Madom at Thiruvisanallur is collected exclusively through Unchavrithi.


As the number of Bhagavathas practising Unchavrithi in the style as prescribed by Dharma Shastras is dwindling, with the passage of time, the coming generation may not even be aware of this divine practice. In such a circumstance, Bhajanothsavams become an ideal platform to participate in Unchavrithi.


May 20 to 22 2018 would be cherished as special days in the lives of all the 25 participants who attended the Music Workshop at Gayaki School of Performing Arts, conducted by Dr. Baby Sreeram.

There are great musicians who are blessed in performing, others who are exemplary teachers, but Dr. Baby Sreeram proved her mettle in rendition as well as teaching music.

The chamber concert held on Sunday had her featuring exquisite krithis. The session was also followed by an interactive session with special focus on rendering various aspects of Manodharma Sangeetha with emphasis on Neraval singing.

With the desire of propagating Carnatic Music in its purest form, Gayaki School of Performing Arts is organizing a series of Music Workshop sessions, conducted by exponents in the field.
The inaugural workshop was done by Dr. G. Baby Sreeram. During the workshop, she taught the students a total of eight krithis, consisting of rare compositions of Trinity, Garbhapuri vasar and Neelakanta Sivan. 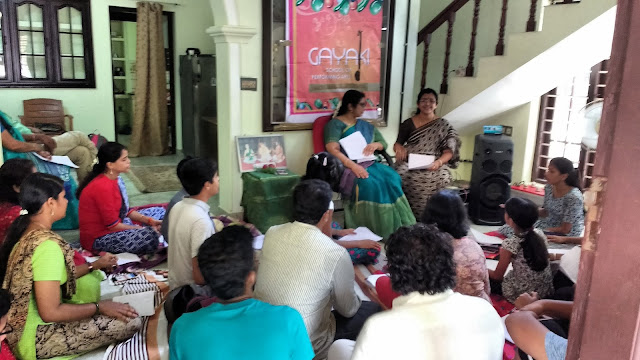 An average teacher would compromise on the nuances of the krithis to match the capability of the students. But great teachers would take the students along with them, and with their excellent teaching skills, make the students proficient in handling even the subtle sangathis, thereby raising the standard of the students’ musical capability. The workshop was a testimony to this. 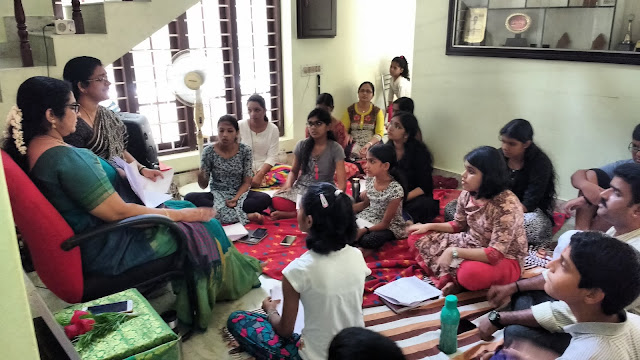 Punctuating the magnanimous and heavy dose music lessons with fun here and there, the class was so lively. After singing one krithi at last after learning it, we would wonder “Wow! How did I learn that so fast?”… And the answer of course, is the Guru’s expertise in teaching. Baby akka would also visualize the music for us, to help us render it better. “After you complete singing the ragam before a krithi, finish it with a phrase that beautifully sums up that raga, like wrapping up a beautiful present”, she says, with her ever graceful smile. I am sure all the participants would have this analogy in mind whenever they render a raga.

While the audience consisted of a wide age range (from 8 to 40 years), all the participants had a genuine interest in music, and were rapt in attention throughout the session. It is this group effect that made all the participants accomplish the task of learning eight krithis in a short span of two days, an otherwise unimaginable feat.

Mrs. Shanthala Raju, owner of Gayaki School of Performing Arts, had painstakingly organized such a music workshop. Music workshops are a priceless experience to all artists. It is very rare that such music workshops are organized in Cochin too. With her primary focus on instilling classical music to all, all other motives like self interest or monitory benefit take a back seat. The very fact that the two day workshop was priced at a very nominal amount itself is proof to her genuine interest in making good music available to all. (Usual two day workshop fee is three times this amount) 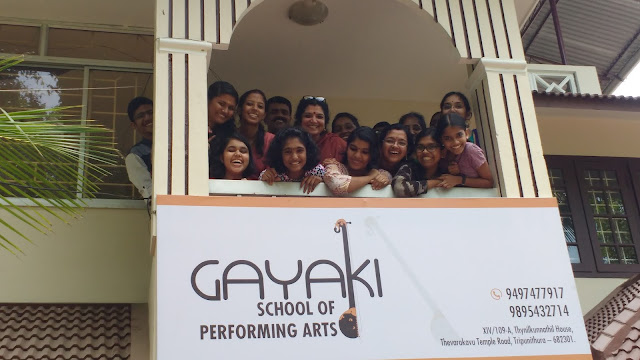 Posted by Poornima at 5:46 AM No comments: